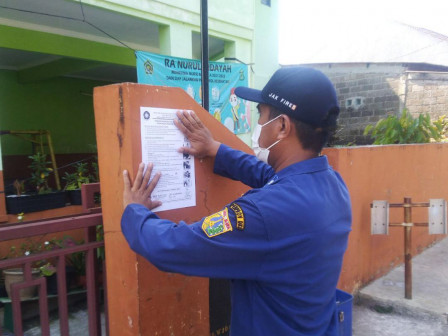 Throughout November 2021, East Jakarta Fire Handling and Rescue (Gulkarmat) Sub-agency had carried out socialization and fire handling in 554 locations. it was lower than last months, with total 754 locations in October and 942 locations in September.

"In addition to PPKM Level 2, there are also many fallen trees and flooding cases in November. Thus we deploy personnel to handle it," he mentioned, Monday (12/6).

East Jakarta Gulkarmat Sub-agency's Prevention Section Head, Edi Parwoko stated, from total 554 locations, his side carried out socialization in 125 worship places, 419 collector roads, and 10 educational institutions. In order to support this socialization, in November, his side deployed 92 operational cars, 457 motorcycles, and 949 personnel.

"Besides fire prevention and control, we also socialize people about health protocols in order to prevent COVID-19 transmission," he said.

Socialization was carried out by Gulkarmat personnel by traveling around the village or using loudspeaker in mosque, musala, and educational institutions.

"We also distributed pamphlets and put stickers in strategic locations thus it could be easily seen by many people," he conveyed.