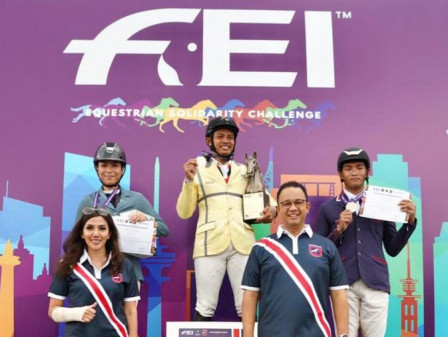 He handed over the medals for the 130-cm class to Agung Riyanto (Bosco - Branchto Stable) and the 145-cm class to Marco Wowiling (Equinara Horse Sport).

At that time, he expressed his gratitude for the role of Equinara Horse Sport which has brought Jakarta on the radar for activities and even equestrian championships in Jakarta.

"We know that this facility in Jakarta is one of the best, and has even been recognized in the southern hemisphere. We want this to be a place where athletes can train and bring Indonesia's name to the international arena," he expressed, as quoted by Jakarta PPID's press release, Monday (6/27).

He also correlated that the 2022 FEI Jumping Challenge is very important for the existence of Jakarta as a global city.

"Jakarta has again hosted an international event in the last few days. This is like a message in the Jakarta Celebration commemoration that Jakarta is a global city and one of them is to host this event. Today is an important global event. I express my appreciation and hope that it will continue to grow and more championships will be held in Jakarta," he added.

Aside that, he appreciated the organization of an event with international regulatory standards like this, which received an overwhelming response from athletes and residents of Jakarta.

"I'm happy and proud to see the enthusiasm of the participants who come from various provinces to compete, especially Jakartans who enthusiastically welcomed the equestrian sport," he concluded.

As for the information, there are about 182 horses (504 Entries) with participants from 27 clubs who come from West Java, Central Java, East Java, Bali, Lampung, and South Sumatra.