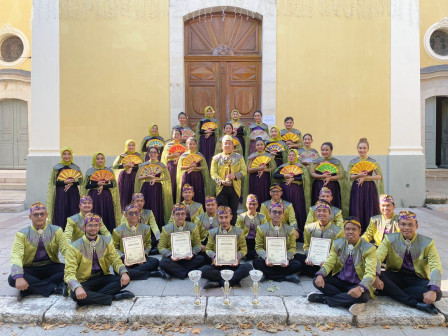 They represent Indonesia from July 2 to 10, 2022, in competitions in Spain and France.

“JYC is a choir under the Jakarta administration, where the coach is the Youth and Sports Agency (Dispora). In previous years, they often won dozens of the best achievements and awards in various countries in the world, including in this championship," expressed Dispora Head Achmad Firdaus, as quoted by Jakarta PPID's press release, Monday (7/11).

Founder and Conductor of JYC Septo Adi Simanjuntak said that as many as 37 JYC contingents this year representing Indonesia on the world stage and carrying a mission to introduce indigenous songs, traditional clothing, and culture from Indonesia to the world's citizens.

"They presented the song "Yamko Rambe Ramko" which was warmly welcomed by the jury, audience, and other contingents. Even locals praised them when they presented a spontaneous performance at the pier of Bandol City, Provence, France, Saturday (7/9)," he explained.

He went on to say that in Spanyol, they won in the Folklore, Pop, and Gospel categories; Best Conductor and Best Choreography; as well as the best performer in the International Choral en Provence competition in Bandol City, France.

"This achievement was achieved after outperforming 23 contingents from other countries, such as from the Netherlands, Spain, Italy, Portugal, Poland, and various other countries," he added.