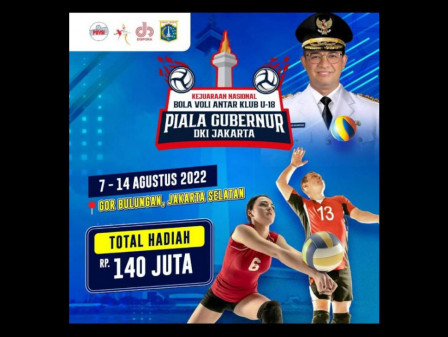 The Youth and Sports Agency (Dispora) and Indonesian Volleyball Association (PBVSI) are about to hold the U-18 Club Volleyball National Championship from August 7 to 14, 2022, at Bulungan Sports Center (GOR), South Jakarta.

This is to find talented players

There will be 16 men's and 16 women's teams from 11 provinces in Indonesia that will compete for the Jakarta Governor's Cup and cash prizes with a total of Rp 108 million.

Dispora Head Achmad Firdaus appreciates and supports this competition as it is an effort to advance volleyball in Indonesia, especially in Jakarta. Jakarta will send two volleyball teams to the event, which is the first time.

"This is to find talented players. With the participation of Jakarta, hope it can create talented athletes who can bring the good name of Jakarta, even Indonesia," he expressed, Friday (8/5).

Jakarta PBVSI Chairman Zulfarshah stated that as the host of this event, Jakarta would field two men's teams and two women's teams.

The first team with the name Jakarta 1 came from the Student Sports Training Center (PPOP) team. Meanwhile, the Jakarta 2 team was the winner of the qualifier that was held last week.

"Hopefully, these two men's and women's teams from Jakarta will emerge new volleyball talents in Jakarta and Indonesia," he hoped.