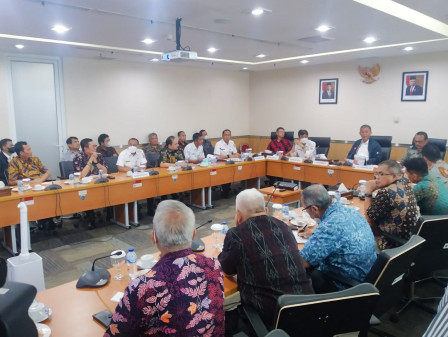 Jakarta Legislative Council (DPRD) Chairman Prasetyo Edi Marsudi revealed that he agreed with the increase in the budget for the Indonesian National Sports Committee (KONI) Jakarta, which will prepare for Regional Training (Pelatda) ahead of the 2024 National Sports Week (PON) in Aceh and North Sumatra.

We have to support

By so, he wants KONI Jakarta to continuously improve sports achievements in order to create athletes who excel and dominate at the national level.

"We have to support. Just say what you need considering the budget lies in the Jakarta Youth and Sports Agency (Dispora)," he expressed, in an audience with KONI Jakarta at City Council Building, Wednesday (6/29).

He assessed that coaching in sports management is an important aspect. The preparation phase through measurable coaching for the welfare of athletes is a condition that must be met to achieve sports achievements. To realize it, budget support is urgently needed.

"I asked for new management, let's be enthusiastic to excel at the regional level. Our target must be mastery," he asserted.

KONI Jakarta Chairman Hidayat Humaid expressed his party had started doing athlete tests in the Pelatda series, which falls on July 1, 2022. It would involve around 1,350 athletes, 250 coaches, and 200 assistant coaches from 82 sports disciplines.

By doing so, he would propose an additional nominal of around Rp 71.6 billion through the 2022 Revised APBD. He hoped that the legislation could grant it.

Dispora Head Firdaus stressed that his support was not only aimed at KONI but also at the SOINA sports championship which was aimed at groups of people with disabilities. Therefore, he made adjustments to avoid disparities on the part of both sides.

"This is just the beginning, hope we can improve it. Of course, we can discuss everything transparently," he closed.