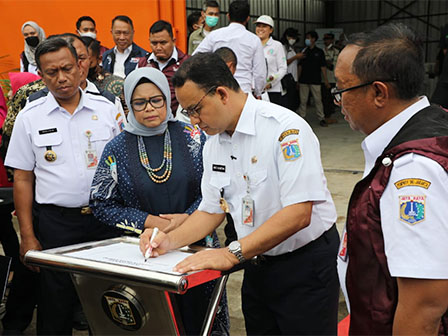 We are now putting forward an integrated waste management model

The JRC has been planning since 2018 to implement a scheduled pattern of sorting and transporting waste. By doing so, it is expected that there will be an increase in community participation in the selection of waste, changes in the mechanism, transportation of sorted and scheduled waste, and processing of easily biodegradable waste and recycled materials.

According to him, it was able to create a new paradigm when the remaining waste could be used for something useful.

"When you hear the word trash, the association is useless. We are now putting forward an integrated waste management model to reduce the amount of waste that goes to landfill. This model is indeed a new paradigm, as there is a role for community participation in starting from waste sorting. Then there is a change in the mechanism for transporting waste that has been sorted and scheduled. There is also the process of recycling waste," he expressed, as quoted by Jakarta PPID's press release, Wednesday (10/5).

He also explained that this conscious effort to sort waste was deemed successful in reducing waste by 60 to 70% at the Bantargebang Landfill.

"This is also accompanied by internal training of the ranks. In 2021 which started from trials in six models, now it has been implemented in 1,369 RWs in Jakarta, approximately 50%. This is a lesson. Alhamdulillah, already 13% of households consistently do waste sorting. It must be continued, as this is a process of changing habits, from the habit of not sorting into sorting, from the habit of not picking up on a certain schedule to now being scheduled based on the type of waste," he explained.

"Hope it can be completed with the facilities that are currently being built in Pesanggrahan, which is targeted to be completed by the end of this year. By so, the conditions we see like this place will be able to see all over Jakarta," he concluded.

As for the information, the JRC program is carried out based on the Minutes of Meeting (MoM) between the Environment and Forestry Ministry and the Japan International Cooperation Agency (JICA), which is revealed in the Project Design Matrix (PDM) between the Jakarta Environment Agency, Osaki City Government in Kagoshima Prefecture, Japan, and SRC.

The administration has also launched the Gerakan Jakarta Sadar Sampah (Jakarta Movement Aware of Waste), where people can collaborate to create a cleaner and greener Jakarta through awareness to tackle and make better use of waste.

He added that a change in the pattern of waste management is needed from gathering-transport-disposal to using waste as a resource. Sorting is an important step in processing waste thus it can be reused.

The collaborators who participated in the success of this JRC program to completion, among others; Duitin, Rubah Kertas, Plasticpay, Octopus, Rumah Pulung, Rumah Sosial Kutub, Waste4Change, and Eco Enzyme Nusantara.