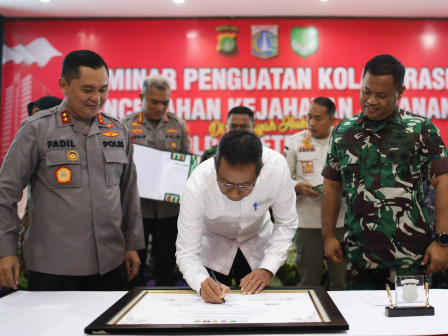 Brawls, robberies, and motorcycle gangs are of concern to us and most of the perpetrators are children

This agreement signing is a form of strengthening the synergy of all stakeholders and the potential of the community in order to prevent and overcome street crime following their duties and functions under the jurisdiction of Polda Metro Jaya.

On that occasion, street crime was a problem in Indonesia's national capital and big cities.

The current perspective on street crime in Jakarta is divided into several clusters consisting of juvenile delinquency, social disease, and crime groups.

He explained that street crime never went away, instead it became more varied. His party also assessed that if it was only oriented toward law enforcement, street crimes would not be completed. In this era, we need a modern approach to policing with a preventive approach.

"There is a fact if we get along and get along this problem can be solved. This success all must be with togetherness. We need to work and move together to face this societal disease and juvenile delinquency," he exclaimed.

Simultaneously with the signing of the Agreement on the Joint Prevention of Street Crime Problems in the Legal Area of Polda Metro Jaya, the Ada Polisi app was also launched. However, he emphasized that not all problems can be solved only by digitalization.

“We have also launched the Ada Polisi app to deal with this problem. Digital is not a shortcut, but a means to make it easier for us to achieve a goal without forgetting interaction," he stated.