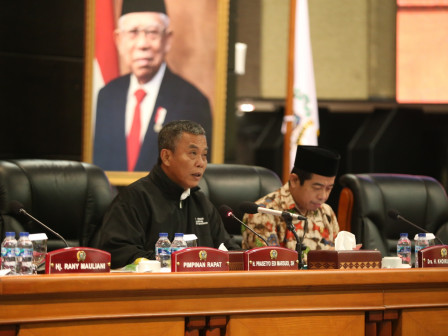 The Jakarta Legislative Council (DPRD) together with the Jakarta Provincial Government, finally agreed on the value of the 2023 Draft City Budget (RAPBD) in the amount of Rp 83.78 trillion. This agreement was ratified at the Jakarta DPRD Budget Committee meeting, Friday (11/25) morning,

After the agreement, we will complete it on Tuesday (11/29)

Jakarta DPRD Chairman, Prasetio Edi Marsudi said that the agreement was decided after passing through in-depth and vertical research. Starting from the leadership of the council, leaders of commissions, and leaders of factions with the Regional Budget Team (TAPD) through the Budget Committee (Banggar) and the Joint Executive Meeting (Rapimgab).

"Based on the results of the discussion of the commissions with the Budget Agency and the executive, the 2023 Draft APBD by Rp 83.78 trillion can be approved," he expressed.

According to him, the amount of the figure had undergone some adjustments from each commission. The agreement on setting the budget ceiling that was included in the 2023 Draft APBD included Financial Assistance Expenditures, Unexpected Expenditures (BTT), Unused Funds (Silpa), Regional Revenue (PMD), Regional-Owned Enterprises (BUMD), and so forth.

Before the approval was given, five commissions under Jakarta DPRD had submitted notes on the results of discussions on the Draft Bylaw on Amendments to 2022 APBD at the Banggar work meeting at the same time.

Commission A Chairperson, Mujiyono disclosed that in one of his recommendations, he asked the executive to immediately carry out digitalization in the context of accelerating emergency response. Therefore, it was necessary to prepare an integrated system for emergency handling, thus the distribution of emergency information and the handling process could be carried out systematically, faster, and accurately.

"To support it, there must be synergy between BPBD, Satpol PP, Fire and Rescue Agency (Gulkarmat), and Communications, Informatics, and Statistics Agency (Diskominfotik). So, emergency handling can be done properly," he expressed.

In the meantime, DPRD Commission B, in its recommendation read by its chairman, Ismail, proposed an additional budget allocation for the KPKP Agency to focus on food subsidies, additional budget for the PPKUKM Agency for MSME coaching, training, and proportional addition of companion human resources.

Then Commission D Vice Chairperson, Rasyidi uttered that the recommendation to Perumda Air Drinking Jaya is to inventory and replace and renew or rejuvenate drinking water pipes that are damaged and old, which have the potential to cause leaks that can harm the Regional Public Company.

As for Commission D through its Commission Secretary, Syarif, recommended the Environment Agency to cooperate with the Parks and City Urban Agency, as well as the Maritime, Agriculture, and Food Security Agency or other circles for the utilization of fertilizers produced from waste processing.