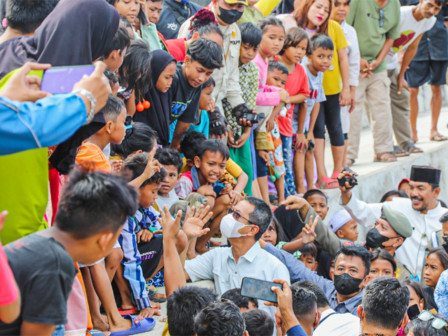 Jakarta Acting Governor, Heru Budi Hartono, visited the coastal embankment in Kalibaru, Cilincing, North Jakarta, Friday (1/20). During the visit, residents seemed enthusiastic about welcoming him and had a chance to hold conversations with residents who had been waiting for him at the edge of the embankment.

With the completion of the Kalibaru beach embankment construction, the Acting Governor ensured that the National Capital Integrated Coastal Development (NCICD) project would continue to overcome tidal flooding in coastal areas.

"Of course, the results of discussions and meetings at City Hall a few weeks ago, we checked the embankment. There are indeed some rather difficult points such as in Muara Angke and later we will discuss them with the community," he expressed, as quoted by Jakarta PPID's press release.

From the visit results, he saw that there were several facilities and infrastructure that still needed to be repaired. Among them were a fish auction place and a temporary water reservoir or mini polder on the Kalibaru beach embankment.

"The fish auction place must be repaired and the water parking area must be perfected or a mini polder. Once again, the mini polder is for temporary water storage, there are still buildings left and right. Please monitor the mini polder as well," he added.

"This is called the NCICD, there is the construction of a coastal embankment and there is an NCICD, which is a sea wall in the middle of the sea. In Kalibaru, this is called a coastal embankment, which, at the time I made a statement about the inauguration of the reservoir in Bogor, was the responsibility of the local government, 22 km or so. Now, it has been implemented, until later 2027," he explained.

In the coastal embankment construction, there would be green open spaces (RTH) and public open spaces, thus they could be used for greening spaces and spaces for interaction between residents.

He urged residents together with sub-district, urban village, and police officers to monitor the Kalibaru Beach embankment, thus it would not be damaged. It was because its existence was able to protect the Cilincing area and its surroundings from the threat of tidal flooding.

"Please monitor the embankment. By doing so, there will be no seepage of seawater around Cilincing and its surroundings. Once again, please take care of it. We take care of everything for Jakarta in the future," he asserted.