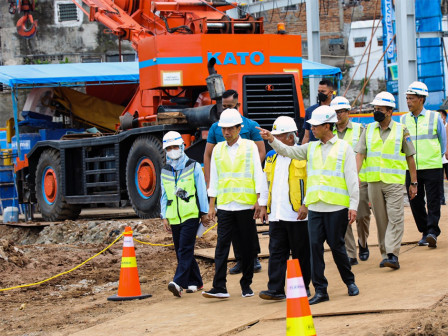 The pipe connection has been completed

According to him, the pipework was done. By doing so, the sodetan could function and reduce the risk of flooding in Jakarta by the end of April.

"The pipe connection has been completed, it only remains to connect a few centimeters but President saw it earlier. That means the sodetan in the tunnel is already functioning. At the same time, the fireplace will be made for sheet pile to widen the river and it will last until April," explained the Acting Governor, as quoted by Jakarta PPID's press.

He also explained several obstacles encountered, one of which was land acquisition which took up to six years.

"One of the issues is land acquisition. However, the East Jakarta Mayor has socialized this issue. This is because if the inlet functions as an outlet, the water will flow pretty fast. So, it is not widened here, it will block the flow of water," he explained.

On the other hand, President Jokowi uttered that flood management in Jakarta must start from upstream to downstream. According to him, work on the Ciawi Dam has been completed, followed by the Sukamahi Dam.

Then the land for the Ciliwung River sodetan had been acquired 1.5 months ago, thus the drilling could continue.

"Underneath, it has arrived in Jakarta, the handling efforts will be completed soon. Insya Allah (God Willing), in April, it was completed for the Ciliwung River Sodetan, which (construction) had been stopped for six years," he expressed.

This project will reduce the flood discharge of the Ciliwung River by channeling 60 m3/second of water to the East Flood Canal when the river is no longer able to accommodate the water discharge at an estimated 25-year re-flood discharge of 508 m3/second.

Thereby, it will reduce the risk of flooding in several areas downstream of the Ciliwung River, such as Kampung Melayu and Manggarai.

As for the information, it was also attended by Public Works and Housing Minister, Basuki Hadimuljono; East Jakarta Mayor, M Anwar; and Development and Environment Assistant, Afan Adriansyah.