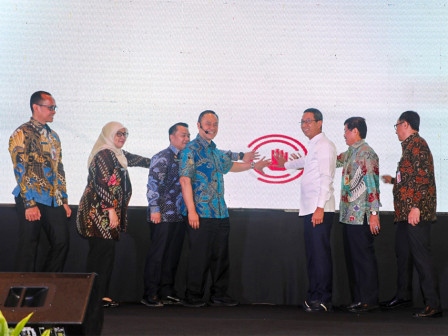 emphasize once again that every ASN must have high integrity

This launch is a follow-up to the MENPAN-RB Circular Letter No. 20/2021 on Implementation of Core Values and Employer Branding of ASN. At that time, he said the core values of Morality, namely Service Oriented, Accountable, Competent, Harmonious, Loyal, Adaptive and Collaborative must be the basic values that guide all Jakarta ASNs in carrying out their duties and functions.

"Make the work culture of Morality and Proud to Serve the Nation as a guideline and basic values in working, serving the community, and advancing Jakarta," he asserted, as quoted by Jakarta PPID's press release.

According to him, they should be proud to serve the nation, thus every task can run wholeheartedly and with full responsibility. Therefore, each regional apparatus needs to socialize and cultivate Core Values with Morality consistently and continuously, thus they understand and implement them properly and correctly.

"I emphasize once again that every ASN must have high integrity and be guided by the applicable laws and regulations. Don't open opportunities and opportunities to parties who have the potential to sink into KKN practices," he explained.

He also explained the 3 priority programs of the Jakarta Government, namely Flood Control, Handling Traffic Congestion, and Economic Growth. In working according to the priority program, he advised them to understand history, thus they can run the program sustainably.

Then they were also expected to do simplification and innovation. Innovations that are carried out do not have to be large and complex, but can be made from simple but impactful innovations. He also reminded that in carrying out their duties, they have authority and resources that come from the state.

Therefore, according to President Joko Widodo's directives, authority and resources must be used in an accountable manner with high loyalty to the government, nation, and state.

Jakarta Human Resource Development Agency (BP SDM) Head, Muhammad Miftahulloh added that the implementation of ASN Core Values and Employer Branding, as well as the Launching of ASN Core Values with Morality and ASN Employer Branding Proud to Serve the Nation are one of the ASN management transformation strategies to support Bureaucratic Reform and improve performance sustainably towards World Class Government.

It was also very important as strengthening the work culture within the Jakarta Government and as one of the keys to the strength of an organization's work culture in realizing the government's vision and mission.

"Jakarta continues to strive to improve services for people's welfare. Through various sustainable development policies and services that have been provided, it is expected to improve the socio-economic conditions of Jakarta people," he explained.

As for the information, the launch itself was attended by 4,680 participants. 479 of them attended the face-to-face meetings including the Acting Regional Secretary for Jakarta, Deputy Governor for Culture and Tourism, Jakarta Secretary Assistants, OPD heads under Jakarta Government and CPNS Formation 2021.

Then 4,201 others took part online, namely sub-district and urban village heads in Jakarta, agents of change in Jakarta, the environment and formation civil servants 2019.