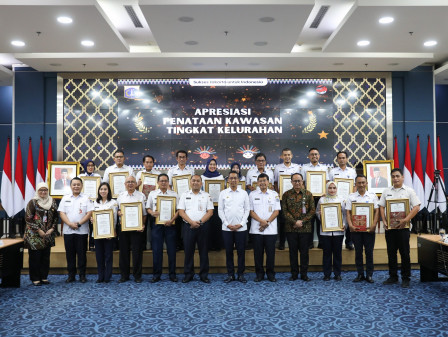 Jakarta Acting Governor, Heru Budi Hartono appreciated the 17 urban villages that are trying to realize the revitalization of green areas. The appreciation was given by awarding the "Best Areas Revitalization at Urban Village Level in 2023" award certificates to urban village heads at City Hall, Central Jakarta, Wednesday (1/25).

This is a moment to encourage

Moreover, the Jakarta administration is currently intensifying the revitalization efforts in a bid to reforest the area by utilizing available land, especially government-owned assets.

According to him, this award was not the end of an effort, but a new chapter in maintaining performance by taking care of the revitalization of these green areas.

"This is a moment to encourage, for example in Kembangan Selatan Urban Village, it turns out that there are assets belonging to the local government. We ask for the area to be carried out intensive care, thus it is well revitalized again," he expressed, as quoted by Jakarta PPID's press release.

He asserted that it must be carried out in synergy between regional apparatuses.

"Additionally, there must also be initiatives (to carry out revitalization) without having to be asked. Hopefully, in the future, more sub-districts will do the same thing beyond the current time (17 sub-districts)," he added.

He added that his party will continue to monitor all administrative areas to ensure maintenance of green areas continues to be carried out. In this matter, he instructed every urban village head and sub-district head to always realize greening in potential areas.

"I will make a tour to see how we show the green land maintenance process. Besides that, we have to manage various existing lands (potentially) for greening, thus Jakarta looks more beautiful and green," he explained.

Aside that, he instructed each Park and City Forest Sub-agency in six administrative areas to seek two locations to be revitalized as green areas. It was because the green area could also be used by the community as land for empowering food security.

"I want them to revitalize two parks in their areas. Apart from making our city greener, it can also be empowered for food security programs for residents," he stated.

Here are 17 urban villages that won appreciation in the revitalization of urban village-level areas for 2023: