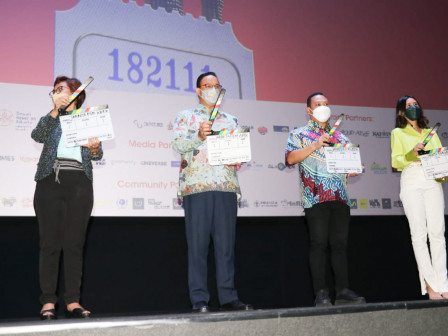 Besides reviving the country's film industry, it also helps encourage the awakening of the nation's spirit

The international-scale film festival held by Jakarta Tourism and Creative Economy Agency will take place from November 18 to 21. The film, titled Ranah 3 Warna, directed by Guntur Soeharjanto, was the opening show at JFW 2021.

The Governor assessed it is expected to bring many benefits, especially for the creative industry in the film world. It could not be separated from the Jakarta administration's attention, as the film industry in Indonesia was one of the affected sectors during the Covid-19 outbreak.

"Besides reviving the country's film industry, it also helps encourage the awakening of the nation's spirit. Through films, this nation's self-confidence can also be raised," he expressed, as quoted by Jakarta PPID's press release.

He also hoped it could become a new platform for the emergence of Indonesian filmmakers and become a routine activity in the capital city. Moreover, the interest in the film world during the pandemic was quite high and the momentum was right.

"We also hope it gives opportunities for all parties, support the creative economy too. This is because this festival is a proof that creativity and real work can still be born amid Covid-19," he added.

Predictably, it was able to open up new opportunities for work and could be a part of recovering the post-pandemic economy, as a form of collaboration in the film sub-sector (Studio, Human Resources, etc.).

"We express our gratitude and appreciation to the art actors and film stakeholders in Jakarta who have prepared the event," he concluded.