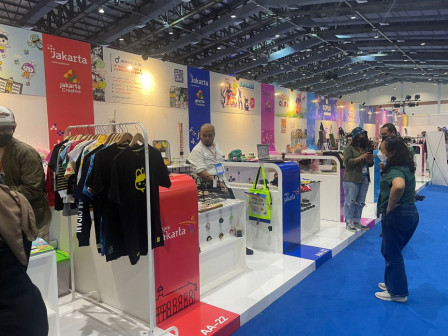 We need collaboration between stakeholders to maximize the creative industry

According to Andhika Permata, Agency Head of Jakarta Parekraf, this year's ICC carries the theme "Local Rise Up", which is the 6th edition of the organization since it was first held in 2015.

As the center of national economic activity, politics, and culture, he disclosed, Jakarta has an important role in the development of the creative economy in Indonesia.

“We need collaboration between stakeholders to maximize the creative industry. One of them is through the local IP (Intellectual Property) showcasing at Indonesia Comic Con 2022," he expressed, as quoted by Jakarta PPID's press release.

He explained that the creative economy is a catalyst for sustainable development growth and has the potential for significant economic contributions, creating a positive business climate, building national image and identity, increasing competitive advantage, and providing positive social impacts.

"Hope this activity can have a positive impact on creative industry players in Jakarta to express and create, as well as promote Jakarta as a center for entertainment tourism and hobbies related to pop culture," he added.

Aside that, creative artists from filmmakers, animators, illustrators, and content creators would also present to fill the event and provide information about creative products made by the nation's children.

As for the information, Indonesia Comic Con (ICC) is the largest pop culture event in Indonesia which is held in the form of an exhibition and focuses on comic book culture, especially various comic books that have been adapted into blockbuster films from countries in Asia to the world.