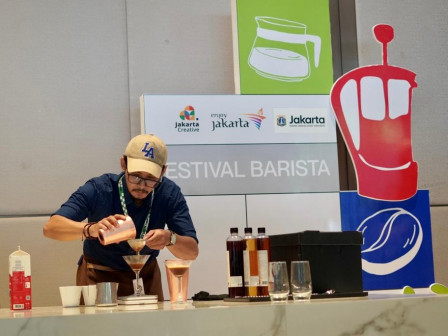 Hopefully, this event can continue and bring the good name of Indonesian baristas in the eyes of the world

Jakarta Parekraf Agency Head, Andhika Permata said that the barista festival, which is national-scale agenda also facilitated the collaboration of various brands from Indonesian coffee activists aimed at increasing competence and spurring creativity, and elevating the figure of the barista as one of the driving professions in the creative economy sector.

"The Indonesian coffee industry development is inseparable from the hard work of baristas in developing breakthroughs and innovations. Hopefully, this event can continue and bring the good name of Indonesian baristas in the eyes of the world," he expressed, in a written statement, Monday (12/5).

He said the profession of a brewer or barista is becoming increasingly popular along with the growing trend of enjoying coffee as a way of life, as well as coffee shops which are meeting locations for today's youth.

Barista is even more needed with the birth of special coffee variants or terms for coffee beans with a special taste produced on plantations in Indonesia.

"This competency event is one of the drivers of capacity building to motivate baristas to further hone their skills and develop creations, especially in concocting and serving coffee-based drinks," he expressed.

Besides the competition between baristas, there were also several events, such as Coffee Talks, and pre-events which would discuss coffee business management and the condition of the coffee industry in Indonesia.

There was also a Coffee Market event which provided curated coffee-making equipment, as well as various special merchandise and musical entertainment performances.