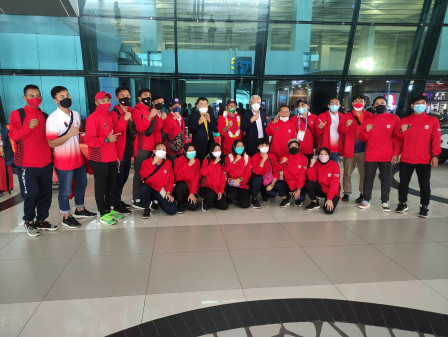 "Not only won the gold medal, Jakarta women's sepak takraw team also won silver medal in Quadrant after winning one set from South Sulawesi (17-21, 21-11 and 21-14)," he mentioned.

"Actually, we have targeted two gold medals from sepak takraw, but we missed the men's team. I think for sepak takraw, their skills are mostly the same and the competition is quite fierce," he added.

But he admitted that he was quite satisfied with Jakarta sepak takraw athletes performances. The men's sepak takraw team which usually struggles to beat Riau, has managed to beat it in PON XX.

"Jakarta women's team has also shown good progress. In the last two PONs, they always lost to East Java, but in PON XX we managed to beat East Java in all numbers," he stated.

In PON XX, he informed, Jakarta's sepak takraw contingent were consisted of seven male and seven female athletes, as well as three coaches for men and women teams

"We hope to achieve higher achievements at PON XXI in Aceh and Medan in 2024," he asserted.

He appreciated Jakarta Indonesian National Sports Committee (KONI) who had facilitated optimally starting from departure and accompanied the contingent in Papua.

"We are also happy to be welcomed by Jakarta KONI Deputy Chairperson 4 and their ranks when arrived in Jakarta. This is a form of attention that makes athletes, coaches and me as a manager feel happy. Because we feel that our struggles are appreciated and get attention," he closed.