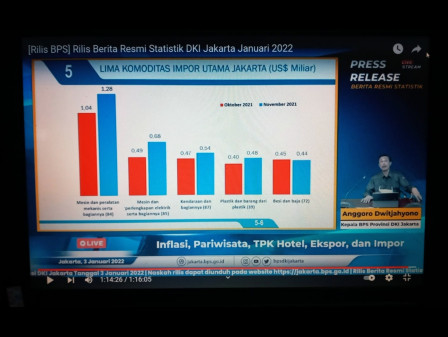 Inflation of 0.45 percent in December was the highest in 2021

According to Anggoro Dwitjahyono, Head of Jakarta BPS, inflation in Jakarta last December reached 0.45 percent. The development of month to month (MtM), January to December or calendar year inflation was 1.53 percent and year on year (YoY) in December 2021 compared to December 2020 amounting to 1.53 percent.

"Inflation of 0.45 percent in December was the highest in 2021. The cancellation of PPKM level 3 during Christmas and New Year has a positive effect. Calendar year inflation by 1.53 percent was the lowest for the last three years in the same period, likewise with 1.53 percent YoY inflation, the lowest in three years," he expressed.

"There are five commodities that experienced price increases compared to the previous month or November. That is cayenne pepper at 55.26 percent, green chili 19.15 percent, red chili 13.29 percent, and cooking oil 9.49 percent. We also noted a decline in beef prices," he said.

As for the data on tourism developments in November 2021 showed that there were 19,046 foreign tourist arrivals via Soekarno Hatta Airport (18,971) and Halim Perdanakusuma Airport (75). Visits in November increased by 38.7 percent compared to October 2021 (MtM). When compared to November 2020, there was an increase of 32.6 percent (YoY).