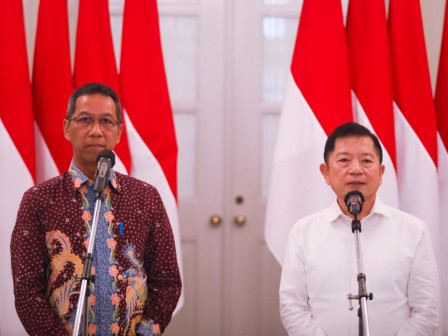 The meeting discussed several matters including, Jakarta Province after the establishment of the Capital City (IKN) in East Kalimantan, regional make-over, and plans for a special regional law.

The Acting Governor said that today's meeting was to discuss Jakarta's future, regional spatial planning, as well as synergies with Bappenas, thus the Jakarta Province after the IKN establishment continues to run well, and the economy grows and is dynamic.

"The minister also gave directions for us to form a small team with Bappenas to discuss the spatial planning in detail," he expressed.

"Several important issues discussed, such as responding to concerns when the capital city moved, did not mean that all activities outside the central government also moved. It must be developed, thus Jakarta becomes a center of growth," he explained.

He explained what Bappenas proposed from the physical side of Jakarta, namely spatial planning by looking back at the master plan from the past to the present, including how to improve with future developments for a better presentation.

President Jokowi also gave instructions that the regional government system in Jakarta would remain as it is today as a province headed by a governor.

"Even, our thoughts in the future is how to make the government organizational structure more agile, thus it becomes a role model for other regional governments for not inferior to the competitiveness of large corporations," he uttered.

His party also thought that matters that were not originally under Jakarta's authority would be included in a lex specialis law, thus the city could take authority for its needs without being preoccupied with something that was not needed. Then the most important thing is that Jakarta remains a center of economic activity.

"That doesn't need to be denied and worried about, the central government will build it even better. Bappenas and the Jakarta Government have also agreed to form a small team to detail everything before it is included in the new law for Jakarta's future," he stated.