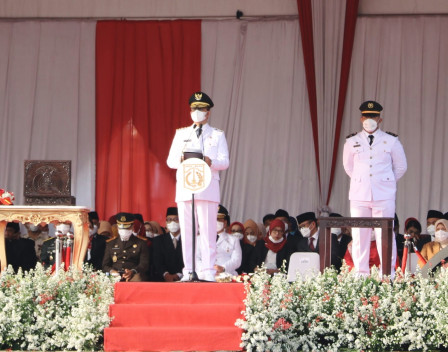 Let us unite our determination to realize a faster nation recovery and rise stronger. Merdeka!

Jakarta Governor Anies Baswedan became the ceremony inspector in which the entire Jakarta administration and Jakarta Forkopimda officials participated in the ceremony.

"Thank you to all elements of the community. It is because Indonesia's independence is declared not by one or two people or by a group of educated people but by all components of the nation. So, remember that this is the struggle of the entire Indonesian nation. We have a responsibility to meet the promise of independence, namely to protect all of Indonesia's bloodshed, promote public welfare, and justice for all citizens," he expressed, as quoted by Jakarta PPID's press release.

Then Indonesia's Independence Day theme this time was "Recover Faster, Rise Stronger". Hence, he explained that for the past two years, especially in Jakarta, we have struggled together to face tough challenges and tests in the face of the Covid-19 pandemic.

"Recover Faster, Rise Stronger. This sentence reminds us of the events we have faced during these two years. We struggle together to face tough challenges and tests. That's why the administration consistently puts forward the principle of justice for its citizens in easing the burden on people in need, as stated in the theme of this year's celebration," he explained.

He went on to say that the principle of justice applied in Jakarta is how to make residents happy systematically and sustainably. It means that Jakarta is a home for all groups and all ethnic groups in Indonesia and a national barometer.

"Jakarta is home to all. Therefore, aspects of justice, equality, and sustainable development are of concern. Through this year's determination of urban and rural land and building tax (PBB-P2), we show that the tax instrument is not only a source of income but also an instrument used to bring a sense of justice to residents," he continued.

He added that the Jakarta administration was trying to restore economic sectors and focus on improvement in all other sectors. Thus, Indonesia's independence could be interpreted as a moment of happiness for all citizens, especially in Jakarta.